Elite Boxing kicked off its 2016 Elite Fight Night (EFN) season in impressive style last Friday with a muaythai and MMA extravaganza at Asiatique in Bangkok. Under its new combined muaythai and MMA format, the event represented the first steps on two long and winding roads that will cross again three more times at venues around the world before ultimately leading to two grand finales in Bangkok and Abu Dhabi.

After a pilot event in 2015, this year’s full EFN Series features a new format that includes both muaythai and MMA fights at each EFN event. Four qualifying events staged between August and November will determine which fighters make it to the two respective grand finales at the end of the year.

Under the banner of The Road to Abu Dhabi Warriors, the MMA fights during the EFN 2016 Series constitute the qualifying events for an Abu Dhabi Warriors grand finale to be held in the United Arab Emirates capital on November 22.

After months of planning and negotiations, the EFN 2016 season was eagerly anticipated, and it did not disappoint. Following an impressive show of muaythai history and skills, the action got underway in earnest with the 4-man muaythai tournament.

In the first bout, Petmankong Non Daeng Gym of Thailand faced off against Casey Parlett of the USA. In what was a close-fought and technical contest, Petmankong just held the upper hand and won on points. The second fight brought Moisa Oleksandr of Ukraine up against Tolipov Mansurbek of Uzbekistan. The Ukrainian showed his experience and technical superiority as he won an exciting fight by TKO in the third rounds.

In the final, the large Ukrainian went on the attack from the beginning and tried to use his strength to his advantage. While Petmankong used all his technical guile, he eventually succumbed to the intense pressure that Moisa Oleksandr was exerting. Petmankong bravely fought right to the end but lost on points to Moisa Oleksandr, who now qualifies for the King’s Cup in December.

In addition to the King’s Cup Qualifiers, one female muaythai fight was added to the bill as part of the Queen’s birthday celebrations. In a fight that was matched and sanctioned by the World Muaythai Council, Loma Lukboonmee of Thailand took on Sylvie von Duuglas-Ittu of the USA for the United Women Trophy. Loma just managed to get the upper hand and was presented with the trophy by Greek pop star, Amalise.

In the MMA The event was a great success and all eyes are now on Sofia for the second EFN 2016 event scheduled for September 24. For more information on the EFN Series, click here: https://www.eliteboxing.tv/en/efn 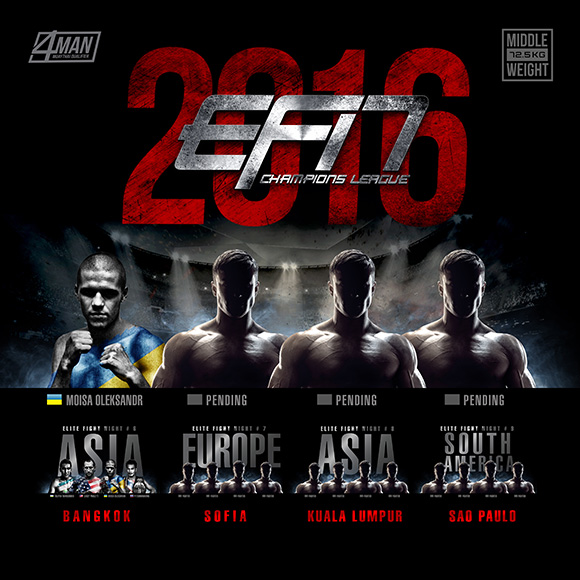